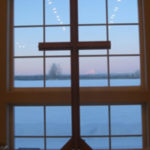 Members and friends of Funny River Community Lutheran Church may wish to make donations to the church online. Click the Donate button below to continue.

SUNDAY SCHOOL/BIBLE CLASS: Sunday School and Adult Bible Study will resume in the fall, date to be determined.

Welcome to our church’s website. We are glad you visited to find out what is going on at Funny River Community Lutheran Church. Our hope and prayer is that you might also visit us.

A church isn’t a building. It is the worshipping community that regularly gathers to receive God’s gifts of word and sacrament and then leaves to express their faith throughout the week in serving God and neighbor in their workplace, school, community and home.

If you are looking for a group of perfect people, you will need to look elsewhere. We are a group of sinners who are in the process of being transformed by God’s love. We invite those who are willing to admit with us that we need God’s forgiveness and are in turn willing to forgive and love others.

Our church isn’t like many today that is trying to conform it’s teaching to society’s changing norms about right and wrong. Our foundation for what we teach and confess is God’s Word (the Bible) that both shows all of us our sinfulness (selfishness) and God’s forgiveness and love.

If you want to meet a “funny” group of Christians, come on over and visit us.

8 God said to Noah and to his sons with him,

14For this reason I bow my knees before the Father, 15from whom every family in heaven and on earth is named, 16that according to the riches of his glory he may grant you to be strengthened with power through his Spirit in your inner being, 17so that Christ may dwell in your hearts through faith—that you, being rooted and grounded in love, 18may have strength to comprehend with all the saints what is the breadth and length and height and depth, 19and to know the love of Christ that surpasses knowledge, that you may be filled with all the fullness of God.

20Now to him who is able to do far more abundantly than all that we ask or think, according to the power at work within us, 21to him be glory in the church and in Christ Jesus throughout all generations, forever and ever. Amen.

45Immediately [Jesus] made his disciples get into the boat and go before him to the other side, to Bethsaida, while he dismissed the crowd.

46And after he had taken leave of them, he went up on the mountain to pray. 47And when evening came, the boat was out on the sea, and he was alone on the land. 48And he saw that they were making headway painfully, for the wind was against them. And about the fourth watch of the night he came to them, walking on the sea. He meant to pass by them, 49but when they saw him walking on the sea they thought it was a ghost, and cried out, 50for they all saw

him and were terrified. But immediately he spoke to them and said, “Take heart; it is I. Do not be afraid.” 51And he got into the boat with them, and the wind ceased. And they were utterly astounded, 52for they did not understand about the loaves, but their hearts were hardened.

53When they had crossed over, they came to land at Gennesaret and moored to the shore. 54And when they got out of the boat, the people immediately recognized him 55and ran about the whole region and began to bring the sick people on their beds to wherever they heard he was. 56And wherever he came, in villages, cities, or countryside, they laid the sick in the marketplaces and implored him that they might touch even the fringe of his garment. And as many as touched it were made well.